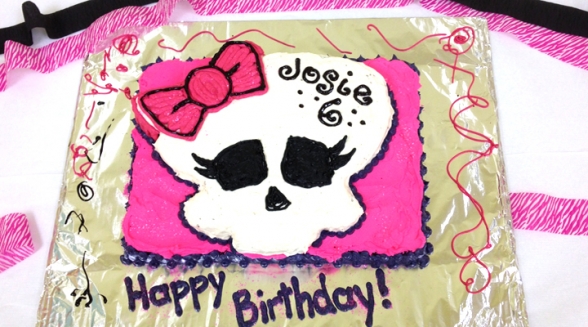 This was only supposed to take a few minutes. And if there had just been some stinkin' unicorns, I wouldn't have been stuck in this massive debate.

I had told my mother-in-law to wait in the car with Nora (the three year old) while my eldest, Josie, and I ran into the party supply store. We only needed a few decorations for her 6th birthday party. And after a year of contemplation, she had finally decided to go with a "Unicorn" theme.

But there was not a single horned horse in that themed aisle. What they did have, to my ultimate horror, was "Monster High."

"I want that! I want Monster High!!!" she shrieked, grabbing a tablecloth.

"But, it's covered with skulls," I said, making a face. "What about this "rockstar" one over here?"

She took a look at the neon pink guitars and peace signs on a black background. But her enthusiasm couldn't be squashed.

That's when the negotiations began.

"Can I just have the tablecloths? Pleeeeeeeease?"

"And these Monster High crowns..."

"Nope, no crowns. Which pinata? There's a butterfly or a guitar."

"Is there a Monster High one?"

"Then I'll get the butterfly one."

I don't really have much against Monster High. For those of you not "in-the-know," (ie: you don't watch Nickelodeon during 1/3 of your waking hours), Monster High is a line of fashion dolls, akin to Barbie, but more similar to the Bratz dolls, with big heads on skinny little bodies. The allure is that these are not just regular dolls; they are monsters—vampires, frankensteins, swamp things, all very attractive, mildly sluttish, emaciated monsters in the tumultuous years of adolescence.

Simply the perfect role models for my fresh-faced kindergartener!

We finally made it out of the store with a Monster High skull balloon, some skull tablecloths and a few generic hot pink and black decorations.

That night, as I tucked my little princess into bed, I asked her again what kind of cake she'd like.

"OK, great!" I exclaimed back, with much relief. But I had already had a vision of how I wanted to make her cake. And it involved the new Barbie "Princess & The Pop Star" movie figurines. Stupidly, queried her further about her cake choice. "Or would you like a guitar cake with Barbie?"

Why, oh why, do I ask, when I should really just do?

Admittedly, I panicked a bit.

"Absolutely not! You are too little to be having a skull cake at your birthday party!"

My sweet girl, she's such a trooper through Mommy's tirades. She even managed to mask most of her disappointment.

"Monster High was not an option," I calmly explained. "You have the option of either a Barbie guitar cake or a unicorn cake."

"Then I want the unicorn!" she said brightly.

"Ok, then," I said, once again relieved. "Good night!" And I headed for the door.

"But can you make it green so it's like a Monster High unicorn?"

Once downstairs, I worked on cleaning up the kitchen while talking to my sister.

"I totally understand why you dislike them," she said. "They dress like whores. But, really, it's not the worst thing in the world. Especially if it's just the logo."

Did I mention my sister is a child therapist? Yeah, it can be SO annoying sometimes!

"Well, I was thinking it is still close to Halloween, so a skull wouldn't be that far off." I was beginning to feel guilty about my little princess not getting the kind of birthday party she really wanted.

"Just think about it. But either way, she'll be happy and have a great party!" My sister has always been keenly aware of when she has successfully made me cave.

A few days later, I posted a pic on Facebook of the Monster High skull cake, complete with hot pink hairbow (despite a skull technically having no hair) that I had painstakingly crafted with homemade chocolate cake and buttercream frosting.

My sister left this comment, "You're a good mom.  I know how hard that was for you :).  The cake turned out awesome!"

Later, during another phone call, my darling sister proposed giving my six-year old a Monster High doll for Christmas. "They came out with a line that is dressed much more appropriately!" I swear, she is campaigning hard for the "Auntie of the Year" award.

I had finally reached my breaking point. "Oh yeah? You get her that doll, and you can expect your eleven-year-old to unwrap a thong!"

She might be a therapist, but I'll always be her big sister!

More in this category: « Making Colonial Memories Singing The Christmas Blues »
back to top