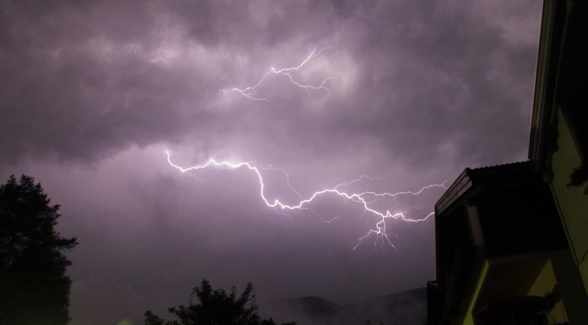 I can’t say for sure if it was a television show, or a book, or a movie, or a friend from school, or everything put together. But somewhere along the way, my eldest child, Josie, decided she was afraid of thunder. She was right around four years old when this decision was made. She’s nearing her sixth birthday now, so this joyful part of childhood has been going on for quite a while.

Big thunder, little thunder, just the sight of lightning will send her screaming through the house.

“Thunder!” she’ll shriek and then, panic-stricken, run to hide behind me.

You may have noticed I previously implied that sweet Josie has “decided” to be afraid. That does sound a little cold of me, doesn’t it? But before you paint me as some sort of hard-hearted mother and begin to feel sorry for the little sprite, let me add this: I have seen the child when she is genuinely scared of something. The look of terror is unmistakeable and the cries are much more severe. She even has a whole different clutch of my leg.

No, what she does with thunder is simply a charade, a dramatic representation of what one’s behavior is supposed to be when one is afflicted with such a condition.

She is so Method.

And, like any good big sister, she was kind enough to pass this behavior on to my younger child, Nora. So now Nora, at three years old, is also terrified of thunder. The older child will sleep through blasting thunder storms, with sheets of rain pummeling her bedroom windows. Even awake, she will frequently miss the long, low rumble of far-off thunder, her attention taken by something else. Little Nora, on the other hand, had to have branches removed from the tree outside her window, because in her mind, the leaves knocking on the glass sounded like thunder.

As a bonus, August of 2012 seems to have been nothing but one big, long thunder storm, here in Hampton Roads. In the years I have lived here, I do not recall ever having, not just this much rainfall, but this much noisy, electrically charged rainfall.

Or perhaps I’ve just never lived in dread of what those loud claps would do to our bedtime routine.

Has anyone else noticed that the storms seemingly happen the most at night? The fun just never stops!

I attempted to tell Josie the little Mommy Stories that are supposed to alleviate a child’s anxiety. God is bowling. Nope, she’s never been bowling, so that not relatable. God is crying. Forget that, the child would start crying herself! The angels are laughing. Josie is the type of kid who expects rational, real-world answers to things. She does not accept.

God or angels as proper explanations. But she’s too little to grasp the actual science behind what is going on.

It was hopeless. I would simply have to resign myself to having two girls attached to each of my legs for the rest of my life.

Then, one night at dinner, as the low, long rumbles started up once again, it finally hit me—that sounds like a truck! Quickly, making it up as I went along, I explained, “Josie, the thunder is the sound of the trucks coming to deliver the rainwater to the clouds.”

“It is?” she asked, turning the idea around in her head, “But trucks can’t carry water!”

By now, Jimmy had caught on to what I was doing and was adding to the story. “Yeah, big tanker trucks. They carry stuff like gas to the gas stations.”

For the rest of dinner we were pummeled with questions about just how this delivery system worked. “It’s a machine,” I explained. "The water goes into a big pool, and then there are hoses that sprinkle out through the cloud.”

So far, this has calmed her down a bit. And when Josie is calm, it is not so difficult to get little Nora calmed down also.

The Mystery of the Terribly Terrific Thunder is solved, for now. But I’m not naive enough to believe that I’m out of the woods just yet. I am in the process of devising my story for where lightning comes from.

Last modified on
Rate this item
(1 Vote)
Happily Ever After

More in this category: « Too Much of an Olympic Thing Time - It’s So Not On My Side »
back to top