This summer, at least so far, has been one of the best summers on record here at the Hilton Homestead. I am loving everything about it! Even the heat is not throwing us off – it just means more time in the pool! (The best days, by the way, are marked by the start up of a washing machine full of beach towels and swimsuits at the end of it.)

But there is one summertime activity that has been like a thorn in my side. The 2012 Summer Olympic Games that have been reported ad nauseam on network television. And why didn’t I just turn the channel? Because my dear, darling husband, Jimmy, has been holding the remote control hostage every evening, recording the daily and nightly competitions, and forcing me to watch them after the girls have gone to bed.

The weekends, of course, are a special treat. We get to watch the Olympics all day long!

Mind you, I have not been forced into viewing every single Olympic moment. There are only certain sports that Jimmy enjoys viewing. Swimming, diving, gymnastics, and track & field are the mainstays. But I have watched segments of just about everything.

At least having some locals represented has made the games more palatable. Gabby Douglas winning the gold medal in gymnastics was thrilling! Especially since I had actually taken a gymnastics class at one of the schools she had attended in the area. (And let me specify that “a gymnastics class” literally means “ONE gymnastics class.” Please do not confuse me with a real gymnast. I did a cartwheel the other day, to prove to the five-year-old that I know what a cartwheel is, and wound up almost tossing my cookies.)

And Amy Tran Swenson, who did a gold-medal-worthy job as goalie for the field hockey team, also hails from the area. If they could give medals for individual performances in a team sport, Amy would definitely earn a couple!

Now before you start to think that I am “overreacting” or being a “drama queen” (both of which could be marginally true), let me add this. The girls and I were lunching with my dad at Y-Not Pizza one lovely afternoon when the two-year-old points to the TV hanging behind the counter across the restaurant and exuberantly shouts, “That’s Daddy’s show!” Can you guess what it was?

No, Jimmy did not tie me to a chair and prop my eyelids open with toothpicks. And yes, we do have more than one television located inside this house. But here’s the funny thing about our nightly TV ritual: for me and the hubby that TV time really acts as our “couple time,” when we can unwind and talk (or not talk) and, after a long day of work and kids, be on the same couch, in the same room, together. I rarely do anything else in those couple of hours before bed, unless I can do it on the couch in front of the TV, right beside him.

We watched the Closing Ceremony on that same couch the other night. Little did we know that it would take two (excruciatingly long) hours to get through. (Stupidest Part – A tie between The Runway Models and the enormous Foam Puzzle of John Lennon’s Face. Coolest Part – A tie between Freddie Mercury revving up the crowd on huge TV screens and The Spice Girls.) And finally (finally!), the 2012 Olympic Games were over.

The next morning, as I basked in the glory of having minimal Olympic coverage on my beloved Today show, Jimmy walked in.

“Can you believe they are adding golf to the 2016 Olympics?” he said excitedly.

Nope. I absolutely do not want to believe that one.

More in this category: « Little Bear Lost Thunder, Thunder—Go Away! »
back to top 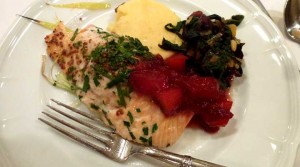