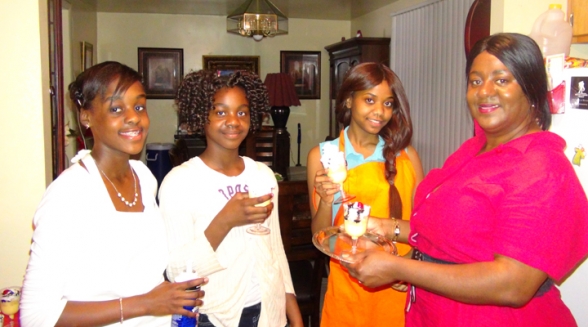 In the heart of Hampton are two of the most ambitious young women you will ever meet—the Kalu sisters: Phyllis, 14, and Nina, 13. Despite their ages, these ladies radiate positive energy, warm smiles, and confident, easygoing personalities. Together they share a passion: food.

Phyllis and Nina were raised in the Bronx area of New York, watching both their grandmother and their mother, Denise Riley Wilson, cook for a large family. Denise’s favorite dish to cook for her daughters is paella, a traditional family recipe passed from generations.

“It is a dish that is good to eat and beautiful to prepare,” Denise said. “I like to serve food to my family that makes us feel happy. If they feel good about eating it, I feel good about serving it.”

According to Phyllis and Nina, not many teenagers they know enjoy cooking like they do. They aim to change that by starting their own “tween” cooking show. They’ve already posted one cooking video on their YouTube channel, Cooking With Kalu, and are planning more. They also aspire to someday have a television show by the same name. On the show, they want to explain simple recipes and show dishes that are easy for beginners to recreate. They hope others around their own age will see how exciting cooking can be and become more likely to cook on their own.

“We want kids to realize that there are other things to do besides play video games,” Nina said. “Cooking is so much fun, and we want to pass that along to other people.”

Phyllis and Nina got a taste of cooking on television when they cooked on a segment of The Hampton Roads Show in February. Their mother entered them into a contest to be featured on the show, and the sisters were surprised when they won. They were the youngest candidates to be selected.

“I always try to tell them that they can do anything if they just believe that they can do it,” Denise said. “I figure, why not try for something? You never know what can happen, but you will never get it if you don’t reach out and grab for it.”

On the show, Phyllis and Nina cooked a traditional family dish—Kickin’ Codfish Cakes.* Prepared with an array of vegetables and spices, the cakes are one of their family’s favorite meals. Both girls are slender and petite, and they take pride in making healthy eating choices.

“My favorite part about cooking is eating,” Phyllis said. “I really try to eat healthy, but I guess everyone gives in sometimes. I just love to taste good food!”

Although she enjoys eating nearly everything, Phyllis’ favorite food group is seafood. Nina loves soul foods that her grandmother used to make for her, such as fried chicken and potato salad.

The sisters slowly learned about food and healthy eating by watching their family cook. They began preparing their own dishes when they were around 10 and 11 respectively. They are in the middle of seven siblings, so there is always someone to cook for.

“I love being a part of a big family,” Phyllis said. “I know that I am always surrounded by love. There is always support at home.”

The sisters also receive much support from their local community. The family moved to Hampton only two years ago, and they are fitting right in. The entire family attends New Bethel Church in Hampton every Sunday, and Phyllis and Nina make good grades at Benjamin Syms Middle School, where they both attend.

“I’m nervous about starting Kecoughtan High School next year,” Phyllis said, “but I see it as a chance to meet new people and become more involved in activities.”

Their family and community support the sisters in a wide variety of life goals. Considering they constantly cook in their spare time, their future career choices are different than you might guess. Phyllis aspires to be a dentist, and Nina dreams of being either an actress or a cosmetologist.

Besides cooking, Nina’s main interests are art, fashion, and photography. She recently graduated from a two-year modeling program at Barbizon Modeling Center, and this July, the whole family plans to travel to Florida to support Nina in her audition to land an acting role on the Disney Channel.

Nina admires Michelle Obama and looks to the Obama family for inspiration. Both sisters dream of someday cooking their popular Kickin’ Codfish Cakes in the White House.

“I know my girls will always be a success, no matter what they do,” Denise said. “I’m always looking out for them. They know they have my love.”

Denise looks toward a promising future for her children. No matter where life takes Phyllis and Nina, these two young women are sure to succeed.

Place the canola oil into a frying pan and turn the fire on to medium heat. While the oil is heating up, mix all the rest of the ingredients together and form the ingredients into a hamburger-sized patty shape. Then fry the patties about 3 to 5 minutes per side or until each side looks golden brown. Take the patties out the frying pan and cool them on a rack or place them on a paper towel until they are cool enough to eat. ENJOY!