It all starts with a hammer and a nail.

Rainham Rowe is under a house. To be specific, the petite construction superintendent for Habitat for Humanity of South Hampton Roads is being pressed upon by the home’s underbelly as the mechanism intended to jack the structure up is accidentally lowered. Unharmed but a bit bewildered, the Norfolk resident remembers chuckling to herself and asking, “How did I get here?!”

For Rainham and countless other women, the story of how they arrive at a place historically—and stereotypically—reserved for men probably involved an eagerness to learn new skills, mutual support, and a steadfast belief in a level playing field. Women who choose to pursue a career in the trades set examples for women of all abilities to pursue their dreams. And it all starts with picking up a hammer.

From Handy to Habitat

Discover Careers for Women In The Trades 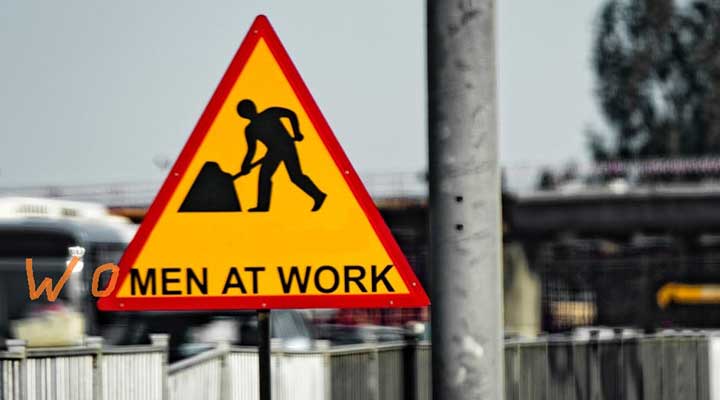 Standing at just over five feet tall, Rainham’s size and gender may have made her a bit of an underdog in the land of power tools and two-by-fours during her formative years, but she says she was drawn to what were once considered guys-only interests from the beginning.

“I was the son my father never had,” she says of her stepfather, who essentially raised her with tools in hand. Rainham grew up in Charlottesville, playing with neighborhood boys and helping her dad fix cars and complete projects around the house. “I kind of learned how to be handy from my dad,” she recalls.

As a high schooler in the 1980s, Rainham set her sights on becoming an architect. “I would dream floor plans,” she says. When she woke in the morning, she would sketch what she had created in her mind the night before. She was the only girl in her high school drafting class.

From shop class at Old Dominion University to teaching herself how to become proficient at home maintenance, Rainham made it a point to absorb as much knowledge as possible. “Either pay to have someone fix it, or you do it yourself,” she says.

After jobs in several male-dominated industries—including being hired as a sous chef because the employer said “it looked good” to have a woman in the open kitchen, Rainham eventually discovered an interest in non-profits and found her way to Habitat for Humanity of South Hampton Roads. Three years ago, she applied for a job as construction assistant with Habitat and soon moved up to site supervisor.

In addition to her supervisory duties, Rainham also manages volunteers, a role she relishes both for the social aspect but also for the opportunity it gives her to advocate for women in construction and the trades.

Rainham says it’s not surprising to see men on the build site make their way to female volunteers in an attempt to take over. “Hey, let them do it,” she will gently advise.

She wants her female construction volunteers, and any woman she meets, really, to be aware both of their potential and the career paths that are available to them. From learning new skills on a home build to trade school to careers in HVAC or plumbing, women can and should pursue options that are no longer “just for men,” Rainham says. Habitat for Humanity is a prime example of an opportunity for women to flex their muscles while helping others. 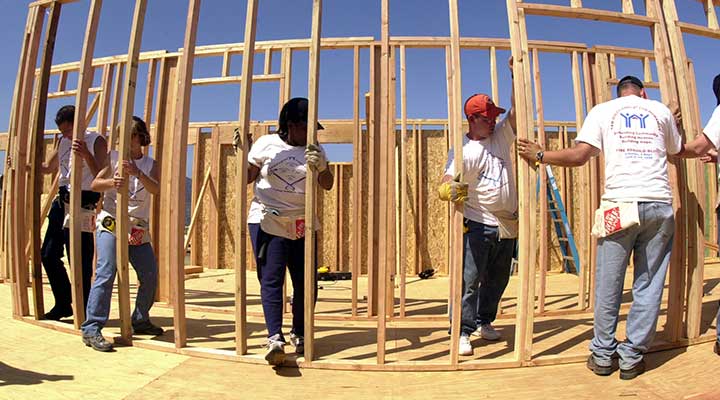 Habitat for Humanity’s mission is to help home ownership become an affordable reality for families. An international nonprofit, it was founded in 1976 by Linda and Millard Fuller. Since its founding, Habitat for Humanity has helped more than 22 million people find affordable, safe housing around the world.

During its first decade, Habitat gained momentum and the support of countless volunteers, including President Jimmy Carter and his wife Rosalynn. In 1984, the Carters joined forces with Habitat and held the inaugural Carter Work Project, what would become an annual week-long housing event in New York City.

President and Mrs. Carter became cheerleaders for the organization and encouraged others to support Habitat’s mission. The nonprofit reports that the Carters have worked on more than 4,000 homes in 14 countries throughout their time with Habitat. The 36th Annual Jimmy & Rosalynn Carter Work Project will take place in Nashville in October.

In addition to making affordable housing possible, Habitat operates “ReStores,” which sell used and new building materials, home furnishings, and appliances. Habitat’s first ReStore opened in Austin, Texas in 1992. In Tidewater, there are ReStores in Norfolk and Virginia Beach.

Locally, Habitat for Humanity of South Hampton Roads (SHR) serves Norfolk, Virginia Beach, Chesapeake, Suffolk, Portsmouth, and Isle of Wight, and Smithfield. Habitat SHR was founded by Portsmouth residents in 1988 and completed its first home in the city’s Prentis Park in 1990. The group has helped hundreds of families in the area since its founding.

A Single Mom Is Forever Grateful

Homeowner Is Inspired To Help Others 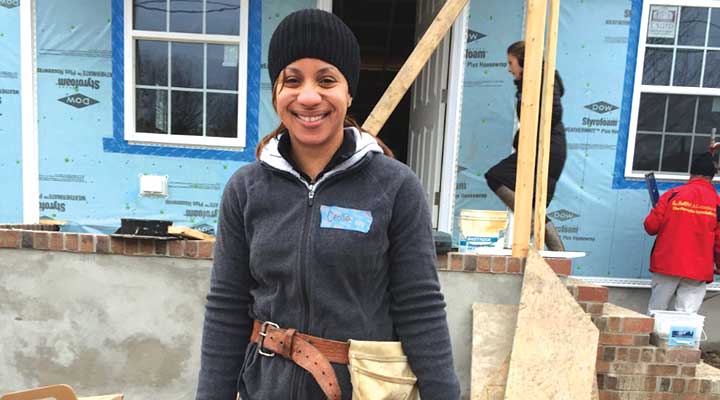 One Hampton Roads resident whose life has been touched by the Habitat mission is Cecilia Mulrain, who closed on her new home in Chesapeake in March.

Families that apply and are selected for a new Habitat home are required to attend home ownership training and earn 200 hours of “sweat equity” while building their home and supporting the Habitat mission in other ways.

Cecilia was on site in Chesapeake assisting with her home build almost every weekend. From power tools and nail guns to painting, she sampled it all.

“I had zero experience building or being on a construction site,” says Cecilia, who works at EVMS. “It was a little intimidating.” But Cecilia found that Rainham’s presence gave her a needed boost. “Having Rainham on the site definitely made it a more pleasurable experience,” she says. “It was very empowering having another woman there.”

When she considers her journey with Habitat, she’s filled with excitement and gratitude. “I really didn’t think it was financially possible for me to own a home, so it feels a bit surreal,” she says. “Creating a stable, healthy environment for my son fills me with a sense of pride and unwavering appreciation.”

Cecilia’s son, Mason, is thrilled that he’ll have his own space in their new home. Previously, he and his mom were sharing a one-bedroom apartment.

“Although it hasn’t been easy, I really am enjoying the process. I’ve learned so much,” says Cecilia, adding that she marvels at how complete strangers have dedicated so much time and effort to building her new home. “I am forever grateful,” she says. “This has changed my life for the better so much that I will continue to volunteer my time to Habitat for other families.” 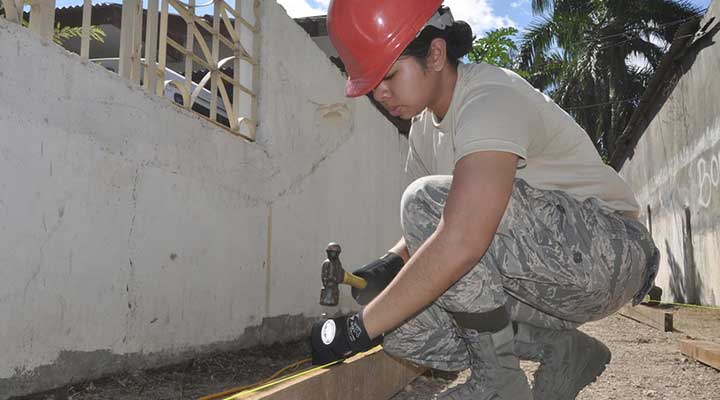 Rainham says many women are inclined to doubt their abilities when encouraged to assist with a build. “The reality is most women don’t learn how to use a hammer,” she says. Because Rainham has so much experience, she cheers on the other women on site, assuring them that they can do whatever it is they put their minds to.

As for those hammers, once she provides a simple demonstration and explanation, the women get it. They’re driving a nail, no longer just tapping it. “You never know what you’re capable of doing until you actually try it,” says Rainham.

Habitat International holds a build just for women once a year, and Rainham says she’d like to see the local organization dedicate a week to women on a build. Men would be present, too, but the emphasis would be to welcome and encourage women and “to get more women to realize we can do this,” Rainham says.

Women like Cecilia and Rainham are proof that support, confidence, and taking the bull by the horns—or the nail gun by the grip—can change everything, including the playing field.

To learn more about Habitat for Humanity of South Hampton Roads, visit shrhabitat.org.

Laura Boycourt is a freelance writer who covers parenting, education, and the Chesapeake. She enjoys spending time outdoors with family. She’s currently working on a children’s book based on her youth on the Bay.