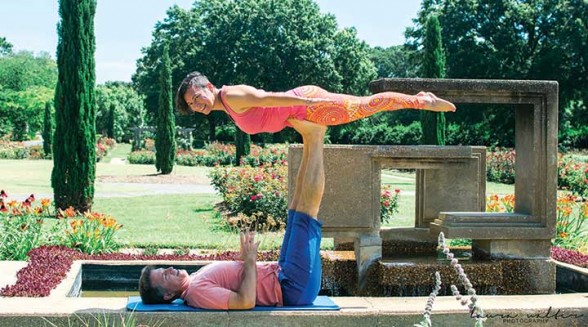 Meet three ladies who have found new passions—and are staying fit, too!

While many women seek out exercise and dance classes like yoga, Pilates, or Zumba, others prefer unconventional ways of getting fit. The Tidewater area is catching up to big-city exercise trends like pole dancing, belly dancing, and acroyoga with more and more ladies giving these unique forms of exercise a try—and loving every minute of it! 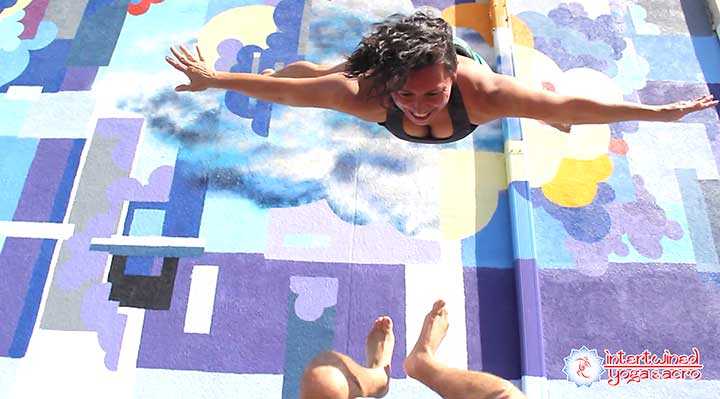 Chesapeake residents Marissa Thompson and her husband, John, were first introduced to acroyoga in 2014 at the yoga studio where they took classes. “We didn’t know what acroyoga was, so we decided to try it just for fun and we have been hooked ever since,” said Marissa, 48, who has been practicing traditional yoga since 2011.

Acroyoga, or acro for short, combines regular yoga with acrobatics and the healing art of Thai massage. Acroyoga sprang up in the 1990s in Montreal and has steadily grown in popularity with acroyoga studios popping up across the globe and people of all ages giving it a whirl.

Acro offers many physical and mental health benefits, such as increased core and muscle strength and stress reduction. Plus it’s a thrill a minute!

Marissa and her husband enjoyed acro so much they decided to open their own company, Intertwined Acro & Yoga, in Chesapeake a few years ago. Intertwined Acro & Yoga offers classes and workshops in traditional yoga and acroyoga, as well as slacklining, which is the act of walking or balancing along a suspended length of flat webbing tensioned between two anchors, similar to tight rope walking.

To perfect her acro techniques, Marissa and John often travel to different workshops and retreats. They’ve attended retreats as close as Washington D.C. and as far away as Thailand. The couple practice acroyoga multiple times a week. They instruct an acro class on Monday evenings in Virginia Beach and teach several workshops throughout Tidewater. Marissa is also a yoga teacher at Yoga Nook, also in Chesapeake.

“One of the main reasons why I like acroyoga is that it provides a playful interaction with others,” Marissa said. “Acroyoga builds trust and communication not only with partners but also within the community. Acroyoga is very physical. You are using resistance to press yourself up or when you are lifting someone up. I definitely feel more confident about my body.”

“There are acroyoga communities all around the world,” Marissa continued. “We have had girls as young as four to women as young as 65 doing it. Anyone willing to do it can do acroyoga.”

During an acro class, participants work with a group of at least three people, who help support and keep the others safe during the workout. The person on the bottom, or the base, uses his or her strength to lift another person—called the flyer—up in the air, while the third person acts as a spotter to ensure no one is injured. Acroyogis learn basic skills of acrobats. Classes also involve acropeutics, or Thai massage, where everyone learns the relaxing and healing elements of therapeutic flying.

“It’s an amazing feeling when you collaborate with another person to create something beautiful like that trust and connection,” said Marissa. “Acroyoga is super fun and there really is no limit. You can discover abilities that you never knew you had. I know my body can do things that I didn’t think were possible.” 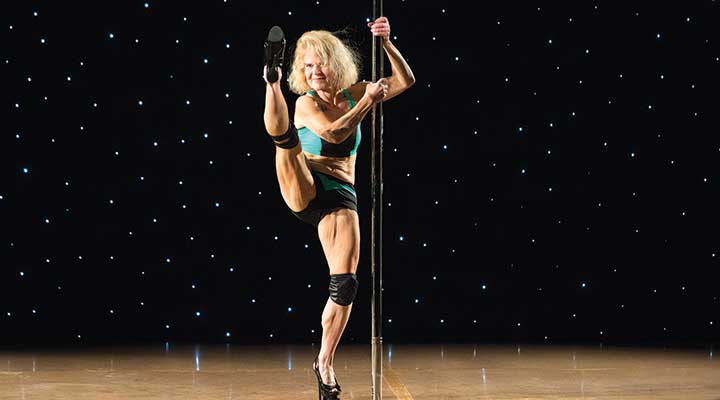 Emily Wells of Virginia Beach feels the same way about pole dancing. Life changed for Emily nearly three years ago when she took her first pole dance class at Studio Rio’s Twisted Fitness in Virginia Beach. Her daughter, Katherine, introduced her to the art.

“I was absolutely dreadful at it at first, but I had so much fun that I decided to stick with it,” said Emily, who is now a competitor in pole dancing. She will participate for her fifth time in the Pole Sport Organization events for amateur and professional pole dancers in Herndon, VA, on March 17.

Pole dance is considered an aerial art form that combines dance and acrobatics centered on a vertical pole. It first began in the United States in Oregon in the 1960s.

“I love the fact that it’s an art form as well as a total body conditioning program,” said Emily. “I love the opportunity that it gives me to be creative and express the joy I feel about being in a physical body. I also love the fact that the pole community is so completely body positive and accepting of all women regardless of age, body type, or background.”

In addition to training at Studio Rio’s Twisted Fitness, Emily practices on her own using two different poles she’s installed in her home. She also takes lessons online with a pole dancer in Berlin, Germany. Emily has noticed a change in her body since she began pole dancing.

“The physical benefits of pole dancing include increased strength, flexibility, and coordination,” she said. “It also relieves stress, stimulates creativity, and is just plain fun.”

Her confidence has also been boosted, thanks in part to competing in the Pole Sport Organization.

“I choreograph my own routines and find the process of selecting music and putting together pole tricks and transitions challenging and stimulating,” Emily said. “Getting on stage in front of judges and audiences can be intimidating, but I’m not entering to win. I just want to be the best that I can be. I also want to demonstrate to other women that it’s never too late to try something new and that we can be beautiful and graceful at any age.”

Emily is quick to dispel the myth that pole dancing is only for women in strip clubs. “Serious pole dancers are artists and athletes,” she said. “Women of all ages do it. On social media, I’ve seen women in their 70s pole dance beautifully. I’m 58 now and plan to keep dancing until I drop dead.”

Emily has always been a lover of dance. She studied ballet as a child and modern dance and jazz while in college. A certified massage therapist and registered yoga instructor, Emily has owned Wells Therapeutics Center for Massage, Transformation, and Healing since 1995.

When it comes to pole dancing, “the most important things are to relax, have fun, find your own style, and stop comparing yourself to other dancers,” Emily said. “We all have strengths and weaknesses and can all be beautiful.”

"Makes Me Feel Like A Free Spirit," says Sharon Nieto. 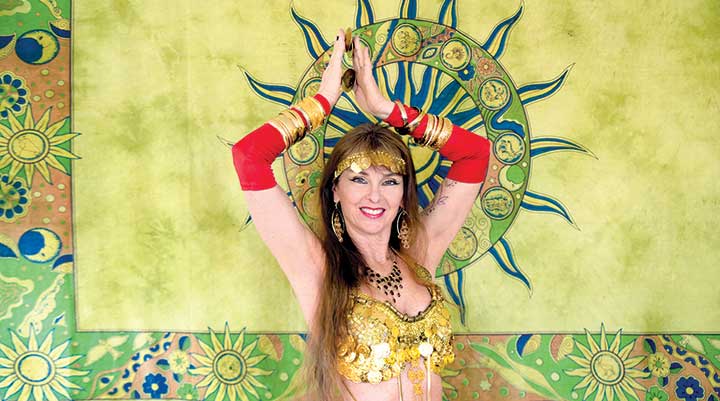 Sharon Nieto recently took up pole dancing, but for more than 25 years, she has been performing as a belly dancer.

A native of Virginia Beach, Sharon became mesmerized by belly dancing back in 1978 after seeing a belly dancing show while strolling through Pembroke Mall. “I just thought the music and the costumes were both so beautiful and exotic,” she said. “It was just so different, and I knew right then and there that I wanted to give it a try.”

Belly dancing is a form of dance that originated in the Middle East, mostly in Egypt, Turkey, and Lebanon. Traditionally, the dance is performed by women for women and involves undulating motions of the abdomen as well as strong gyrations of the hips.

She began taking weekly belly dance lessons through the instructor she met at the mall. Back then, the ladies danced to record albums and made their own costumes for performances.

Sharon took a break from dancing after joining the U.S. Army and then raising a family. She resumed belly dancing in 2000. She’s taken lessons at Bayside Recreation Center in Virginia Beach and with private instructors as well as various workshops to perfect her belly dancing skills.

“With belly dancing, you quickly learn it’s all about body control,” Sharon explained. “Belly dancing has isolation moves, which means you move only one body part at a time. It’s fun, but it’s not easy. I’ve also learned a lot about coordination, balance, and poise as I glide, spin, and turn.”

In 2005, Sharon competed in the East Coast Classic Belly Dance Competition and walked away that year as Grand Champion of the contest.

“The experience was nerve wrecking,” she said. “It was also very exciting to dance alongside so many talented, professional dancers.”

Sharon enjoys traditional belly dancing, which features Middle Eastern music and movements, though she also does belly dance fusion, which has more modern, American-themed song and dance. The 60-year-old is a retired nurse, which allows her more time to dedicate to belly dancing.

She belly dances weekly in her home with four other friends, takes a belly dancing drill class with another instructor, performs monthly with a group at a local assisted living facility, and is also a member of the cabaret dance group, The Feral Show Girls.

Belly dancing has grown in popularity through the years, which pleases Sharon. “I think people like it because it’s such a different way to dance or exercise,” she said.

“People of every age can belly dance. I know a woman who is 82 and belly dances. Children can learn, too,” continued Sharon. “There are also many men who are belly dancers. They bring a powerful, masculine twist to it with their choice of music and movement.”

Sharon says she loves belly dancing because it enables her to express herself as a woman. “There’s just a lot of beauty and grace with belly dancing,” she said. “Belly dancing makes me feel like a free spirit. If you are looking for something completely different to do, something that is really fun and allows you to embrace your femininity, then you should give belly dancing a try.”

Here's What You Need To Know 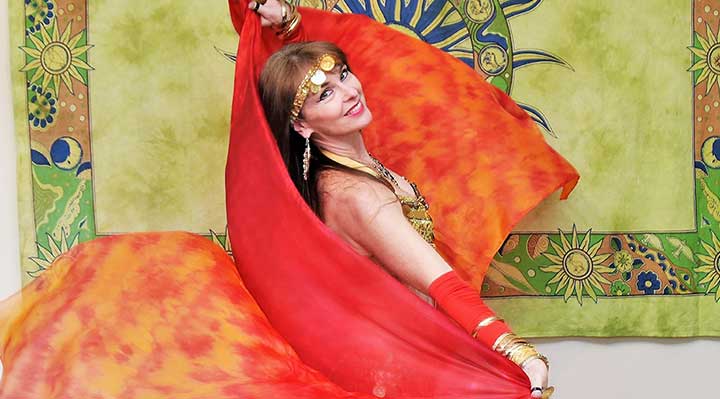 Discover what it's like to fly. For more information about acroyoga lessons, check the schedule of classes here.

Give pole dancing a whirl. You might discover hidden talents. Find out about classes here.

After all your exercise is done, enjoy a massage or yoga class with Emily. Check out the offerings at Wells Therapeutics.