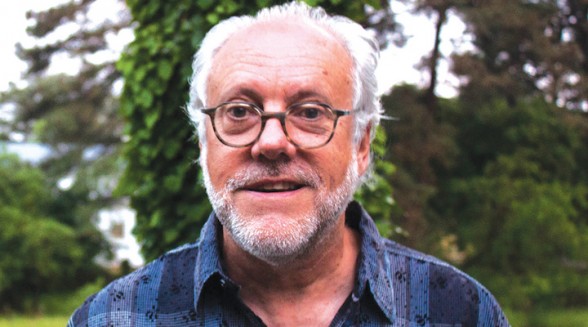 Tidewater Women’s Stephanie Allen spoke with Chris Hanna, artistic director for the Virginia Stage Company, about his experiences in the theatre business and VSC’s latest production, “I Sing the Rising Sea.”

TW: So, first of all, how is the renovation going at the Wells Theatre?
Chris Hanna: It’s going terrifically. We just met with our contractors, and we are on schedule! There is no backup plan. We’re going to be ready to go with “A Christmas Carole,” and then a grand opening in January, so that’s a big relief.

TW: Cool! It looks like the audience has a lot to look forward to when it’s done.
CH: Absolutely. The front lobby is being reconfigured into a bar-cabaret space. The upstairs had never been used really, so we are turning it into education studios.

TW: I read a bit about your history in theatre and that you even lived in England for a while. How has theatre changed since you started working in this business?
CH: The advance of projections. So many productions use projections, which have become so much more sophisticated. When I started in this business, projections were slideshows on stage. And now “I sing the Rising Sea” is going to be told scenically, almost entirely, through projections. And the other thing that has really changed societally in the theatre is attention span. So many plays these days are much quicker and to the point than they had been when I first started working in the business.

TW: Why is that, do you think?
CH: I think because people are more used to things happening more quickly and multitasking. A full production of Hamlet could take four hours. I directed a production [of Hamlet] at Old Dominion last year that was 90 minutes. I don’t feel that we lost anything significantly by going to a 90-minute version, and the audience appreciated that. Other people or scholars certainly would argue with me tremendously, but one way or the other I think that society now likes the idea of coming to Hamlet for 90 minutes and not for four hours. The future moves in one direction—and I’m fine with going with it.

TW: Is there any one person who’s been a particular inspiration to you throughout your life?
CH: So many people serve so many different roles for me. Honestly the person that might be the greatest inspiration to me was a student of mine who I worked with for years, Viola Davis. Viola was somebody that I worked with right as she was starting her career. I was her acting teacher at Juilliard right as she was coming from growing up in a difficult at-risk situation in Providence, Rhode Island, and she rose above that risk and brought something so powerful to her art form, and I learned from that. I love teaching because I learn from students all the time. I’ve always gone back and forth between working professionally and working academically. The reason that I insist on spending so much time in the academic theatre is not because of what I can pass on there but what I can learn there.

TW: Let’s switch gears and talk about “I Sing the Rising Sea.” It’s a commissioned musical, so what part did you have in its creation and what was the vision for it?
CH: This area is an epicenter in sea level rise. I went to the composer Eric Schorr and asked him to create a musical that served that conversation but not in a literal way. I think that so many people in society have become numbed to sea level rise because of the facts. We haven’t spent enough time with real imaginative storytelling, so there’s a lot of dramatic sweep and magical realism in this musical.

TW: Why did you envision it as a musical?
CH: First and foremost I wanted this to be an entertaining evening. And the show is something that is a wonderfully engaging, entertaining sing-along. Now afterward you start thinking about what this means in terms of the water coming up around us. I think that happens more easily with music.

TW: What can you tell me about the storyline?
CH: It starts at the Ocean View Amusement Park. There used to be a wonderful amusement park at Ocean View, and there was a great storm in the 1930s that really changed the geography of Norfolk. It created Willoughby Spit. That summer, a woman set out to set the world record for sitting on a flagpole—this is true, I’m not making it up—and she had to come down because of the storm. That seemed like to me a really amazing jumping-off point. The play actually ends in the year 2047 in Antarctica, so think about the sweep of 1930s Norfolk Ocean View to 2047 Antarctica, and in between it goes all over the world and introduces imaginative characters but also real characters, all of whom are bound together by the sea. It’s so imaginative and almost like a fairy tale that happens to be centered around the idea of the ocean coming around.

TW: That’s an interesting concept. I’m excited to see it! Where do you see the future of theatre?
CH: I think the theatre is going where it’s always been... the center of the biggest conversations in society. That’s where its place has always been. I think as people making theatre our most important job is to be part of that conversation, and we need to change as our conversation changes.

TW: What is your best advice for anybody trying to pursue a career in theatre?
CH: Very simply, it’s to be true to themselves.