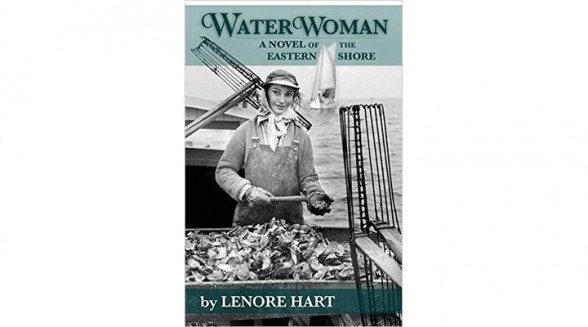 Waterwoman is set in 1920 on a barrier island on Virginia's Eastern Shore, where protagonist Annie Revels fights against all odds to keep her family together after her father, a waterman, dies. Lenore Hart's poignant storytelling grabs the reader by the shoulders and doesn't let go until the last page.

Annie Revels is a hard-headed, break-the-rules woman. Raised on tiny Yaupon Island, Annie wants nothing more than to follow in her father's footsteps and live her life on the water, baiting crabs and tonging oysters. But her father doesn't approve of such notions in a girl; it would be different, he tells her, if she'd been born a son. After he dies in a tragic, all-too-common accident, however, she takes his place both on the water, something no other woman has done, and in the home—to help her family survive. In her quest to act like her father would, she allows her stubbornness to affect the decisions she makes, which have consequences in the end for everyone involved.

For the romantics among us, Hart adds a complicated love story when she introduces Nathan Combs, a hunter and guide for the local tourist hotel. While Annie has come to terms with staying single, she does allow her relationship with Nathan to blossom under the heat of the Virginia sun.

Waterwoman is an exceptional character study that explores the complexities of both loving and hating your family in the same breath, which is displayed poignantly through the relationship Annie has with her younger sister, Becca. Hart deviates from creating the traditional heroine who can do no wrong and instead focuses on developing a real but flawed young woman whom the reader can't help but root for. Annie is selfish and often makes decisions that are reckless, yet she also makes sacrifices for those she loves.

Hart's descriptions of life on the Eastern Shore in the early 1900s easily transport the reader. Waterwoman offers an escape from reality and provides a vivid glimpse of Virginia coastal history. This novel hard to put down once you pick it up.