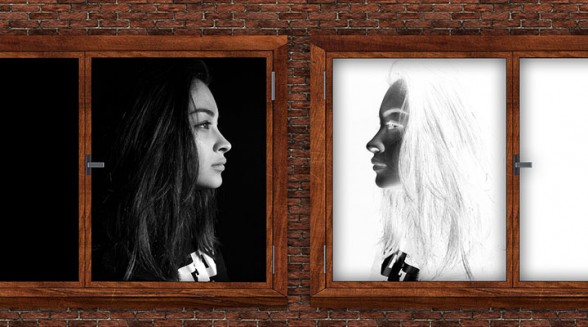 Recently I learned something that I wish I had known three months ago. Someone showed me how to remove the screen image of myself when I'm on a Zoom meeting. One click and I disappeared from my screen while everyone else in the meeting could still see me. I felt an instant lifting of self-consciousness. Not all video platforms have that option, but I wish they did, since it has made my time on virtual calls much more comfortable.

When I first started out in video conferencing, it was distracting to see myself on screen as well as the other person. I was surprised by how often I glanced at my own image. At first, I chalked it up to the novelty of seeing myself on video. Then when it continued, I began to wonder if I were more of a narcissist than I ever imagined. After all, I already knew what I looked like; I had gotten ready for the video call in front of a mirror. What was this fascination with my own image all about?

Initially I comforted myself by remembering that something moving in the periphery of our visual field triggers an irresistible urge to look at it. You can test this out yourself by opening almost any page on-line. The pop-up ads are often off to the side and emit some kind of eye-catching movement. This reassured me that I hadn't succumbed to video narcissism.

The fact that I was peripherally distracted by my own movement proved that my central focus was actually the other person. But then I had to admit that my eye kept drifting back to myself, even if there were multiple tiles of faces competing for attention. I had to face the fact that I felt drawn to look at myself, and not just because of peripheral stimuli.
I started paying attention to what I was thinking about as I watched myself. I noticed my body posture, head tilt, frown of concentration, or looming face as I reached for my water glass. I was compulsively making mental notes about what looked good and what didn't.

Part of this I attribute to growing up in the South, where a woman's appearance is often too much of a concern. Part of it I lay at the feet of style and fashion advertising that warns me to be highly aware of the impression I'm making on other people. And part of it comes from an innate empathic sense about the need for a pleasant presentation to help other people feel welcomed and comfortable. But because understanding these causes did nothing to stop my repeated glances toward my image, I suspected something deeper was afoot.

The relief I felt when I turned off my screen-image was the lifting of self-consciousness. I felt freer to be myself, immersed in the interaction, without monitoring or evaluating my actions. Without that picture reminding me what I looked like, I could just be me. That's when I realized that the video of myself was reflecting not only my physical image but also the little film that runs constantly in my own mind, telling me how I am doing. Being on Zoom has enabled me to finally see something that had been bullying me internally for years. No wonder I wanted to keep looking at it.

Perhaps you too have one of these internal monitors and critics, always ready to evaluate how you are coming across to others. These vigilant internal self-critics probably come into being around sixth or seventh grade when social standing really begins to matter. Around this time, the innocent unselfconsciousness of childhood quickly loses ground to the awareness of peer pressure. We start trying to see ourselves as other see us in order to fit in.

I am sure there are children who are so self-assured that this doesn't bother them, but I wasn't one of them. Like many emerging tweens, I began to give up my unselfconscious spontaneity in childhood in favor of socially sanctioned styles of appearance and conversation.

Who would have guessed that at this late date, a pandemic and a video platform would finally allow me to meet—face-to-face, as it were—with this internalized bully? I realize now that Zoom has given me a second chance—and has given us all a second chance—to be more authentic by becoming aware of how unnecessarily anxious we can be about appearances. Zoom showed me the ever-present self-criticism that I wasn't even aware of, finally making me uncomfortable enough to want it to be gone. Thanks to Zoom, I realized that I had lived with that video in my mind for a long time.

Surely I was socialized enough by now not to worry about my behavior in public. Couldn't I just lay it down or switch it off? I wanted to return to focusing only on the other person and what we were doing, just as I did when growing up and playing with others. I think Zoom has confirmed that I have never liked monitoring myself. It has showed me how much I miss the unselfconscious life of earlier childhood, when being me was much more important than monitoring me.

So I've decided to ditch the self-consciousness. Want to join me? Whether it is on Zoom or just having a conversation, you can mute that internal judge that watches and evaluates you. It has outlived its purpose. You now have the option to hit the Hide Self View and return to just being you.