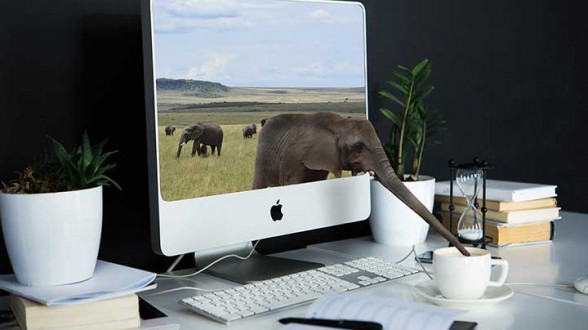 I received unexpected spiritual guidance the other day when I switched my car’s clock back to daylight savings time. After changing the setting, the dashboard screen asked me if I wanted to save the change. It was the vehicular version of asking, Are you sure? Instead of appreciating my car’s thoroughness in confirming my intentions, I found it irritating.

• Irritation is a symptom. I have discovered that when I get irritated, I am probably rushing in a way I’m going to regret. Irritation over little things usually means I’m expecting the rest of the world to read my mind and not delay me. If the one second it took to select save felt like a nuisance, I was probably in a very unpeaceful place inside. Immediately I realized the message from my car was not about setting the time at all. It was actually a chance to check my frame of mind. If that save button was getting to me, maybe I needed to slow down.

• Consider other people. My car’s blind spot indicator holds another powerful spiritual lesson: Don’t claim the whole road as your own. Seeing where other people are and honoring their position leads to respect and good communication. But veering into the other driver’s lane without looking is like insisting on being right: The injury you cause might be your own. Every time we’re tempted to take over, we could instead wonder what might be there that we can’t see.

• Pause before going forward. My car is much less impulsive than I am. It has successfully taught me to set my intentions before moving forward because it won’t start unless I first put my foot on the brake. This took me awhile to learn because I didn’t associate starting the engine with pressing the brake pedal. But now I see how mindful this step is. I’m off to a much better start if I take a moment to be here now before going someplace else.

• Everything doesn’t belong in memory. Like my car, my computer has a wise soul too. It reminds me that just because there are gigabytes of RAM available, it doesn’t mean everything should be held in memory. My computer reminds me of this truth every time I close out a document. It always asks me if I want to save, cancel, or don’t save. I think I want to save everything before I close it out, but do I really?

Grudges are a good example of how putting things in permanent memory can be counterproductive. Resentment and self-criticism are also things that don’t deserve the save button. We may be tempted to create a file over every wrong committed by others, or ourselves, but if we’ve learned our lesson, what’s the point? Do you really want to use up storage on those negative thoughts? Learning to turn our thoughts away from blaming and bitterness is a crucial step in self-mastery. Besides, resolving the issue directly makes more sense than holding a grudge. Next time you’re tempted toward resentment, maybe your choices should be save, transcend, or take constructive action.

• Don’t disconnect without quitting first. Computers scold us if we shut things down abruptly. A little window immediately drops down to remind us there are proper steps to take before quitting anything. Computers dislike unfinished business and want you to tidy up before exiting. They know that anything involving separating or shutting down should engage in an intentional process. Don’t just dump it, or you might regret it. Even computers realize that burning bridges is never a good idea. As much as you’re able, finish up your interactions on friendly terms, and you won’t have to worry about losing something important.

• The one button that needs inventing. While computers and smart phones have many fail-safes and warnings, there is still one to be invented. I’m amazed Google and Apple haven’t put this feature at the top of their development list. We need a pop-up before we send any email or text that says: This message could easily be misunderstood. Should you call him/her instead? Now that would be a really helpful bit of technology. But until they get around to inventing it, we can remember to ask ourselves.

Spiritual wisdom is invaluable wherever it comes from, so let’s remember the following lessons. Be aware that irritation might mean you are going too fast to keep your balance. Just because you have the memory capacity doesn’t mean everything needs to be saved; sometimes it’s good to let things go. Thoughtful delay is better than reactivity, as is being mindful of your intention before you start out. Look over your shoulder before moving into other people’s territory. Prepare everybody involved before shutting anything down, and try to leave all relationships on good terms. Even spiritual instruction from machines can be invaluable in showing us how to have a more peaceful and mindful life.